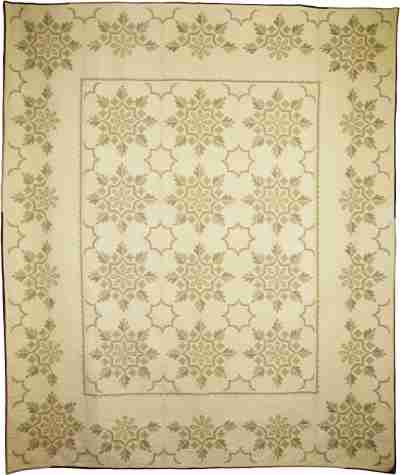 Thanks to all 133 people who cast their votes for the quilt that we will be sending to the Cedarlake Village Quilt Show this year.Â  The favorite quilt,Â “Grandma’s Folly”Â made byÂ Joan UebeleÂ is the one pictured to the right. Â  This quilt was truly a labor of love because Joan started working on it in1961 shortly after she purchased the kit which included all the fabric and embroidery thread for $5.95 at Marshall Field’s.Â  The quilt is going to be a wedding gift for her granddaughter, Savanah Hatch, when she gets old enough to marry.Â Â  JoanÂ  finally finished the quilt just last week!Â  This quilt is what would be called a “whole cloth” quilt with the star motif’s done in cross stitch and embroidery.

Counting the ballots was an interesting activity because we had some people who seemed to have a hard time choosing just one quilt to vote for.Â  We could tell this because the ballot would have a number on it, then that number would be scratched out and another number listed, then that number would beÂ  scratched out and another number listed.Â  In other cases we found messages on the ballot.Â  One said that the vote was for quilt #2 but that all the quilts were beautiful and the decision was very hard to make!Â  Another told us how their decision was made. In one case, the decision was based on which of the quilts the person would most like to cuddle up with.

In any case, we agree that all the quilts were outstanding and that any of them could win at Cedarlake Village…..especially if all of you take the time to go to go to Plainfield and vote for it during the week of September 16-22.Â Â  Cedarlake Village is located at 14899 S. Van Dyke Road, Plainfield, Il 60544.