Gather in the Parlor 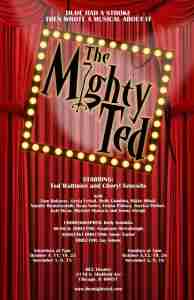 We are blessed to have Ted Waltmire, a stroke survivor and more as a member of our STARS group.Â Â  Last year our group took a field trip to Chicago to see the musical comedy â€œThe Mighty Tedâ€ which was written by Ted.Â Â  Next year we hope to be able to work with the Community Players group to put on our own production of this play. A review from last year’s production at the MCL Theater (Musical Comedy Live) stated, â€œIt’s been said that life can be more hilarious than fiction. So, what happens when someone has a stroke, their spouse loses their job, and both husband and wife are faced with enormous life changes that would generally cause despair? How about write a musical comedy? That’s exactly what happens in â€œThe Mighty Ted,â€ a fantastic new musical at MCL Chicago.â€

Come for both or either.

Let us know if you will need childcare by Monday, September 7.